When a 2015 adult female student sent a photo of her first deer, she also provided this great recap of her successful hunt.  With her permission, we have included it on our site. 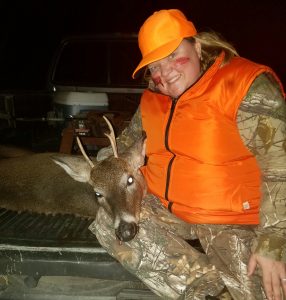 This was my second hunting season after taking your Firearms Safety class in 2015 at the Minnetonka Sportsmen Club. My first year hunt taught me a valuable lesson last year – ALWAYS, prior to hunting, sight in your rifle! Despite my husband’s insistence that it was important to do so, I didn’t listen. So, when I missed an 8-point buck in 2015, broadside at 70 yards away, I was eager to make sure my rifle was correctly sighted in for the hunt this year.

I was fortunate to get an antlerless tag along with the buck license for the 2016 season.  On the last weekend of the season, we arrived at our friend’s 300-acre farm and my husband suggested that I head out to the stand while he set up camp. This was only the second time I had been in the tree stand alone, but I knew I was ready.

I had hardly entered the stand and pulled my rifle up with the haul line when I spotted a doe with her two fawns. Even though I had the antlerless tag, I didn’t take the shot, but she must have heard me, because she bounded off into the tree line. It was a beautiful sight, seeing all four of her feet off the ground as she leapt away with her babies.

A few minutes later, I saw a figure behind a tree in front of me, about 200 yards away – again, not a good shot.  I continued waiting, and suddenly, I saw another one off to my left about 125 yards. I had forgotten my binoculars, and the sun was in my eyes. Frustrated and irritated at not being able to see well through my scope or range-finder, I saw the 5th deer run away before I could get a good line of sight.  Thinking I had lost out on all these opportunities, I became discouraged. How could I possibly have more luck at seeing deer than that?

No sooner than I thought my fortune had run out, I saw another figure pop out of the field. The sun had gone behind the trees, and I could see it clearly through my scope. 125 yards out, broadside, standing still. Not able to determine if the deer was a buck of doe didn’t matter at this point because of possessing the antlerless tag, so I positioned the stock of the 30/30 into my shoulder, lined up my sights, took a few deep breaths, and gently squeezed the trigger. I saw the deer drop. I was immediately excited, but remained hesitant, and tried to remember what you said about tracking a deer. I probably didn’t wait as long as taught in class, but the excitement was overwhelming, so I quickly marked the spot where the deer was when I shot, unloaded the rifle before lowering it to the ground and headed out, prepared to follow its trail into the woods. I didn’t see it run, but I was so excited, I couldn’t be sure.

On the walk over to the spot the deer was, I had to purposefully will myself to calm down, stop, and listen for sounds around me. Nothing. I walked some more, following a set of two trees that had become my landmark. Slowly, I continued, and then, lying in the grass, was the still body of a 3-point buck!

I stood back, watching for any sign that he was still breathing or moving; again, nothing. Being sure my shot was effective, I screamed through the field for my husband, back at the camp. After a few minutes (which seemed like hours), I saw his orange cap in the distance, and I guided him out to my location. The closer he came, the bigger my smile became and his congratulations to me wrapped up a successful hunt.  At my husband’s insistence, I was “marked” as a successful first timer and our friends soon arrived to help us field dress the deer and get it back to camp.  We determined that I shot the buck straight through the heart; one shot, no suffering.

And now, I can safely say, the hunting experience is in my blood! Whether I get a deer or not, I have come to enjoy the experience of being out in nature. Listening to the squirrels and other “unknown animals” rustling in the woods, watching the bald eagles fly overhead, and seeing deer magically appear seemingly out of nowhere, even though you’ve been staring at that same spot for 10 minutes!

And so, I thank you! Thank you for teaching us safety with our firearms, and thank you for being the starting point for our family’s love of hunting!

View all posts by: mnfas_admin